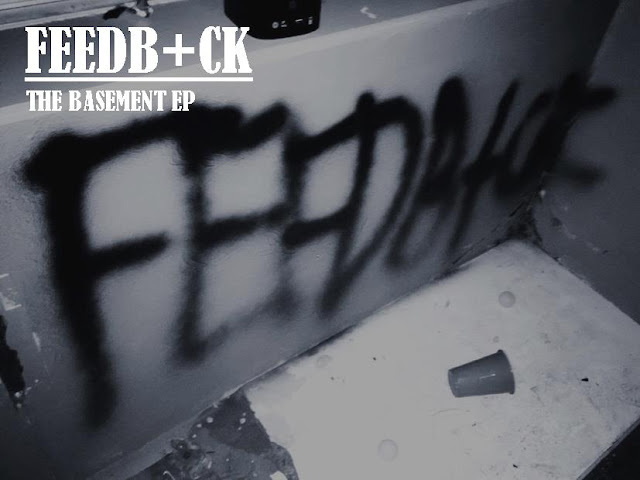 "The Basement EP" is the second EP from a relatively new band from Portadown, Armagh called Feedb+ck. The three piece outfit are made up of Alex Close on guitar and vocals, John Morgan on bass and Peter McCabe on drums. "The Basement EP" which was recorded at the Amma Centre with producer Niall Totten is the band's second EP to be released this year, combined with several festival slots marks a highly productive year for the band formed late in 2016.

The intro to "D.I.D" is raucous and frankly quite brilliant. The drums really hook you in and combine brilliantly with the incandescent bass guitar.
"Late Night Walks" again kicks you right in the face from the opening note. It's loud, it's ballsy, it's gutsy and it's awesome.
"Somebody Else" is bass guitar heavy with a somewhat funky vibe to accompany the grungy lyrical delivery, a match you wouldn't normally think of pairing together but somehow works.
"Words With Alcohol" is the final song on the EP and features raw raspy vocals akin to the legendary Kurt Cobain. The acoustic guitar and whistling melody are very soothing and engaging, a really nice way to end the EP.

Considering Feedb+ck have been together for little over a year, they definitely have their sound absolutely nailed and have a clear vision of the direction they want to take the band. The Basement Ep is a very enjoyable listen which is sometimes sombre, sometimes raw, sometimes emotive, sometimes heavy but always formidable.