The Fast Camels are a rock band from Glasgow, Scotland consisting of Drew Sturgeon, Mark O'Connor, Andy Rennie, Joe Smith and Craig Jenkins. They are heavily influenced by 60's Psychedelic rock, power pop and freakbeat such as Jefferson Airplane, The Beach Boys, The Zombies and Bob Dylan to name a few. They released their debut album "The Magic Optician" back in 2007 and have since gone on to record another 3 albums, the latest of which is "Full Of Strange".  They played some top venues such as King Tut's in Glasgow before embarking on a UK tour which then saw them invited to play at the prestigious Monterrey Pop Festival in California which ultimately they had to cancel due to the departure of one of their original members.
A few personnel changes and a few albums later, The Fast Camels released their fourth album "Full Of Strange" at the start of this month. 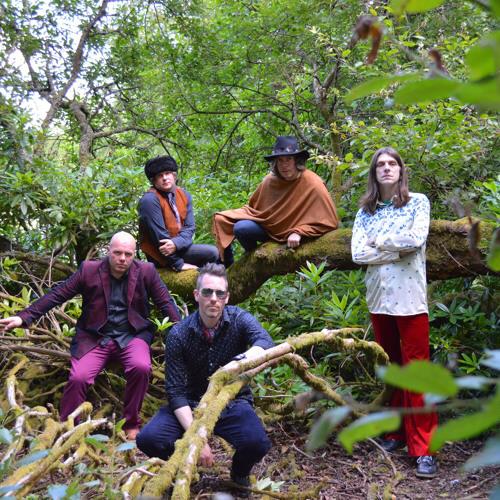 The album begins with "Blissful Serenity" and immediately the influences mentioned are at the forefront with it's authentic 60's sound and psychedelic vocals.
"Caught In A Dream" is exactly what it says on the tin. There's a certain airiness to the whole thing that makes you feel like you're inside a dream. It's not your dream though. It's the dream of another man caught in a dream. Proper Inception stuff going on.
The title track "Full Of Strange" is straight up rock with some very pleasurable drumming driving the song.  "Storyteller" is a humorous tale of clichés with brilliant lyrics such as "I intend to live forever or die trying". Next up is the ominous "Misty" which begins like a scene from a western movie whilst also managing to sound like The Smiths. The psychedelics kick in towards the middle and the guitars wail beautifully.

The organ opens "The Wedding" which is about a relationship that was doomed from the beginning as the wife of the protagonist is a "cheating whore" who is sleeping with his best man. Again, the guitars are incredible and match the vocals perfectly during the "la la la" section which then crescendos before calming down again just before the end.
"Don't Know Where To Begin" is a head nodding, toe tapping track which is pretty much the personification of 60's psychedelic rock. there's nothing to not like about it. Brilliance condensed down into 2 minutes and 48 seconds.
"Sordid Dreams" the classic middle of the album song. It's pretty good but kind of nondescript. There's nothing bad about the track but it kind of gets lost in between two great songs.
"Family Tree" is utterly ridiculous on first listen but each subsequent listen shows how incredibly layered the track is with more and more pieces coming to the forefront with every play.
"The Curious Tale Of Peeping John Foley" is the most laid back song on the whole album. It's got a haunting quality to it thanks in part to the delivery of the storytelling and the constant bells ringing. It creates a melancholic atmosphere for the listener. "Honeymoon" is the complete juxtaposition of the previous song with it's Hendrix style opening and then pure rock n' roll and aggressive vocals.
The album closes with "Statue On The Hill" which shows a solemn side to the band with a much more emotive sound. Even the guitar seems to be gently weeping.

"Full Of Strange" is quite frankly a brilliant album. It offers something different with almost every song, some of which are definitely full of strange. It's the type of album that should be listened to several times to appreciate how intricate the sound is.

Check out the video for "Full Of Strange: